Skip to content
Mon-Fri: 9AM - 5PM ESTServing Canada & Beyond
FacebookTwitterLinkedinRssGoogle+YouTube

The behavioral shifts among North Americans mirror those of consumers around the world, to an extent. Certain consumer segments are exhibiting more of these shifts than others, but collectively, they underscore the challenges and opportunities that consumer-focused companies will face in the near term. Companies would do well to keep in mind the following five truths about today’s North American consumers.

1. In the search for savings, millennial moms lead the pack.

American consumers are reducing their spending in a variety of ways. Overall, 49 percent agreed that they’re “increasingly looking for ways to save money.” Among millennial women (ages 21 to 34) who have children, 72 percent agreed with that statement. Indeed, millennial moms are much more likely than the average American consumer to engage in belt-tightening behaviors such as comparing prices, using coupons or loyalty cards more often, seeking out sales and promotions, shopping at several stores to find better deals, and buying more products in bulk. They are also more apt to change their eating habits: more than 40 percent of millennial moms said they’re eating at home and cooking from scratch more often, and about one-third said they’re eating leftovers and packing lunches more often.

2. They are brand loyal but look for ways to spend less on their brands of choice.

Among survey respondents, 52 percent—down from 64 percent in 2012—said they’ve modified their buying behaviour when it comes to their favourite brands. The trend is most pronounced among Hispanics: 61 percent of Hispanic consumers said they’ve changed their buying behaviour. Many American consumers have remained loyal to their preferred brands but are watching their budgets more closely: buying only with discount coupons or when these brands are on sale, shopping around to find retailers that sell the brands at lower prices, or purchasing in smaller quantities.

3. They’re now much less likely to ‘trade down.’

Only 9 percent of consumers reported trading down—that is, buying cheaper brands or private-label products instead of their preferred brands. Millennial moms, consistent with their money-saving tendencies, had the highest percentage of down-traders, with 14 percent. The most vulnerable product categories (those with the highest trade-down rates) were bottled water, household-cleaning supplies, pasta, and rice—perhaps indicating that branded products in these categories haven’t differentiated themselves enough.

Compared with past survey results, a slightly larger percentage of down-traders reported being pleased with their experience—46 percent in 2015, up from a steady 42 percent since 2012. More than two-thirds said the less-expensive brand exceeded their expectations with regard to quality and value for money. And most down-traders didn’t regret their decision: 74 percent said they intend to stick with the less-expensive option and won’t return to the brand they bought previously. Interestingly, half of those who said they’d stick with the cheaper option still preferred the more expensive brand but weren’t willing to pay more for it.

Among US down-traders, 62 percent opted for private-label products. But the shrinking pool of down-traders has slowed private-label revenue growth. Witness what’s happening in the over-the-counter (OTC) drugs category: the percentage of consumers claiming to have traded down in OTC products has steadily fallen from 21 percent in 2009 to a mere 8 percent in 2015. And, in the past four years, the market share of private-label OTC products has been gradually declining.1A similar pattern is playing out in other consumer-packaged-goods (CPG) categories as well. After years of share increases, US private-label products saw their share fall slightly in 2015.

4. Some splurge on alcoholic beverages and personal-care products.

As Exhibit 2 shows, the percentage of US consumers who traded down is equal to the percentage who traded up. In 2015, 9 percent of consumers—compared with only 6 percent in 2013 and 2014—decided to upgrade their purchases in certain categories. Alcoholic beverages and personal-care products had the highest trade-up rates (Exhibit 3), suggesting that higher-end brands in these categories were able to persuade consumers that their products are worth the price premium.

Trade-up rates varied by consumer segment as well. Millennial moms proved just as willing to trade up as they were to trade down—14 percent of them said they’ve traded up. Baby boomers (Americans between the ages of 55 and 74) were the least likely to trade up; only 5 percent of boomers said they did so.

5. They’re willing to shop across channels.

Another important change in spending habits has to do with where people shop. US consumers claimed to have shifted as much as one-fifth of their spending toward each of three channels: online pure-play retailers, hard discounters, and club stores. Their stated behavior aligns with actual retail sales figures; in the US market, those three channels have had the highest growth rates since 2009. (Online grocery’s share in US retail remains low, but—in light of increasing consumer interest and the channel’s rapid growth in other markets such as China, France, and the United Kingdom—sales in online grocery may very well rise in the US market in the near future.)

In light of these new consumer behaviors, what actions should consumer-goods companies and retailers take? How can they best position themselves for future success in the US market? In our view, they would do well to consider the following imperatives, each of which addresses one or more of the behaviors discussed above.

Read the article by McKinsey

Create strong propositions for both the high end and low end

Particularly in product categories with high trade-up and trade-down rates, companies must create propositions and pricing strategies to capture the top and bottom of the market. Crafting tailored propositions requires investments in advanced analytics and in sophisticated revenue-growth-management (RGM) capabilities. These allow leading companies to arrive at data-driven answers to critical questions such as: What role does each brand and each SKU play in the assortment? How, if at all, does that role differ by channel and by geographic region? Which promotions are most effective and why? Based on these insights, companies devise detailed strategies for their brands, portfolio, pricing, and promotions—and refine these strategies for each channel, customer segment, and geographic region. For instance, RGM analytics helped an alcoholic-beverage manufacturer shift its portfolio toward more favorable price points in one of its most important geographic regions, boosting revenues by $600 million in four years despite declining industry-wide volumes.

It’s not enough for companies to do general research on the core demographic groups in the US market, namely millennials, boomers, and Hispanics. Within each of these groups are subsegments that behave very differently from other consumers in the same segment. For example, the majority of millennial women—but only 30 percent of millennial men—say they’re increasingly using coupons and loyalty cards. The most successful companies will be those that develop a nuanced and detailed understanding of the various subsegments’ specific needs and preferences.

In e-commerce and other high-growth retail channels, too many large consumer companies lag smaller, faster-moving competitors. In categories such as skin care and cosmetics, for instance, new players are capturing online share that is disproportionately large compared with their offline share. CPG companies need a comprehensive channel strategy—one that maximizes reach and minimizes channel conflict. The strategy should include aggressive investments in the highest-growth channels, partnerships with winning formats, and the development of a robust digital play, which entails not only creating digital assets but also building a strong presence on the websites and mobile apps of leading multichannel retailers. As manufacturers sell their products across multiple channels, they must ensure that their prices for identical SKUs are consistent across channels—or else they risk losing consumers’ trust. As for channel conflicts, companies must identify and quantify these conflicts, then design and implement containment strategies (for example, different packaging for each channel or coordinated promotional calendars) that they monitor and refine on a regular basis.

After years of economic uncertainty, American consumers are feeling less financial pressure. However, much can change in the coming months, particularly in the run-up to and aftermath of the presidential election. Companies should therefore stay in tune with how consumer sentiment is changing. That said, they shouldn’t wait to act on the imperatives discussed above, which will help position them for success regardless of what happens. Article credits to Max Magni, a senior partner at McKinsey

Please check junk folder when looking for our reply. Thank you!

Contact us now to get started with a free, no obligation consultation.

Our most recent results

Wholesale trade in Canada rose for the eighth consecutive year in 2017, up 9.4% to $741.1 billion, as a result of higher sales in all seven subsectors. This was the highest growth rate since 1997 (+13.7%) and the highest level on record. Growth in wholesale trade in 2017 was driven mainly by growth in the first two quarters, up 3.9% and 2.5% respectively.

In volume terms, wholesale sales were up 7.7% to $652.7 billion in 2017, reaching their highest level and growth rate on record. 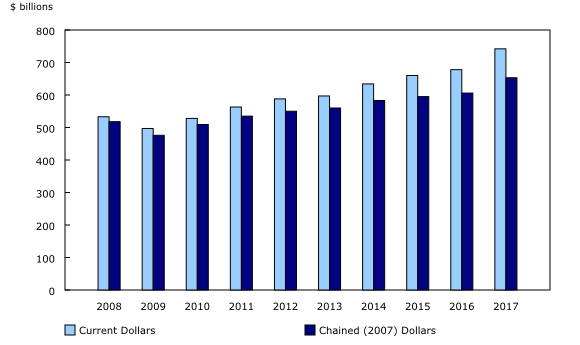 Higher sales were recorded in all provinces, led by Ontario and Quebec.

According to the Survey of Employment, Payrolls and Hours, an average of 777,275 payroll employees worked in wholesale trade from January 2017 to November 2017, up 0.4% after declining 1.2% for the same period in 2016. For the same time period, the wholesale trade sector accounted for 5.9% of Canada’s economic output as measured by gross domestic product.

Labour productivity, or output per hour worked, in the wholesale trade sector grew 3.9% in the first quarter of 2017, as output increased 3.8% and hours worked edged down 0.2%. This was the second consecutive quarterly increase and the highest growth rate since the fourth quarter of 2005 (+5.1%). The wholesale trade sector, along with the finance and insurance, retail trade, and manufacturing sectors, were the main sources of overall productivity growth among industry sectors in the first quarter. For more complete information, visit Statistics Canada and keep your finger on the pulse of wholesale trends in Canada.

Please check junk folder when looking for our reply. Thank you!
Go to Top